Introduced by Merrifield in 1963, solid phase peptide synthesis (SPPS) has immediately become one of the most powerful and versatile molecular tool for the construction of peptides. Importance of this technique was fully appreciated and brought Nobel Prize to Robert Bruce Merrifield "for his development of methodology for chemical synthesis on a solid matrix". This technique based on the fact that the peptide chain is covalently attached to an insoluble polymeric resin. Growing peptides on an insoluble solid support has some distinct advantages. Firstly, separation of peptide from soluble reagents and solvents simply carried out with filtration and washing, which requires less time and labor compared to tedious work-up procedure. Moreover, many operations are amenable to mechanization and extensive range of robotic instrumentation are available now. After programing the amino acid sequence of peptides and describing synthesis parameter, machines can automatically perform all the synthesis steps required to prepare peptide samples. Additionally, excess reagents can be used to help to drive reactions to completion and physical loses of peptides stay in minimum level due to robust covalent attachment of peptide resin in reaction condition. The major problem with this approach is the absence of feasible analytical techniques employed for following the course of the reactions. Progress of the reactions are depend on qualitative color tests.

The principles of SPPS are illustrated in Scheme 1. The first amino acid residue is tethered to insoluble polymeric resin via a linker (between the solid support and the synthesized peptide) functionality. Any functional group in amino acid side chains must be protected with ‘permanent’ masking groups that must stay intact in reaction conditions during peptide chain assembly. After loading the first amino acid, the ‘temporary’ masking groups on α-amino group is removed, then second amino acid is introduced. The carboxy group of the second amino acid being activated for amide bond formation through the generation of an active ester or by reaction with coupling reagent. Following with the coupling, excess reagents are washed away throughout the resin. The protecting group is removed from the N-terminus of the resulted dipeptide, prior to addition of third amino acid, then third amino acid was coupled by activation of its α-carboxylic group. This deprotection/coupling cycle is repeated until the target sequence is obtained. At the end of the synthesis the peptide is released from the resin and the side chain protecting groups simultaneously removed. 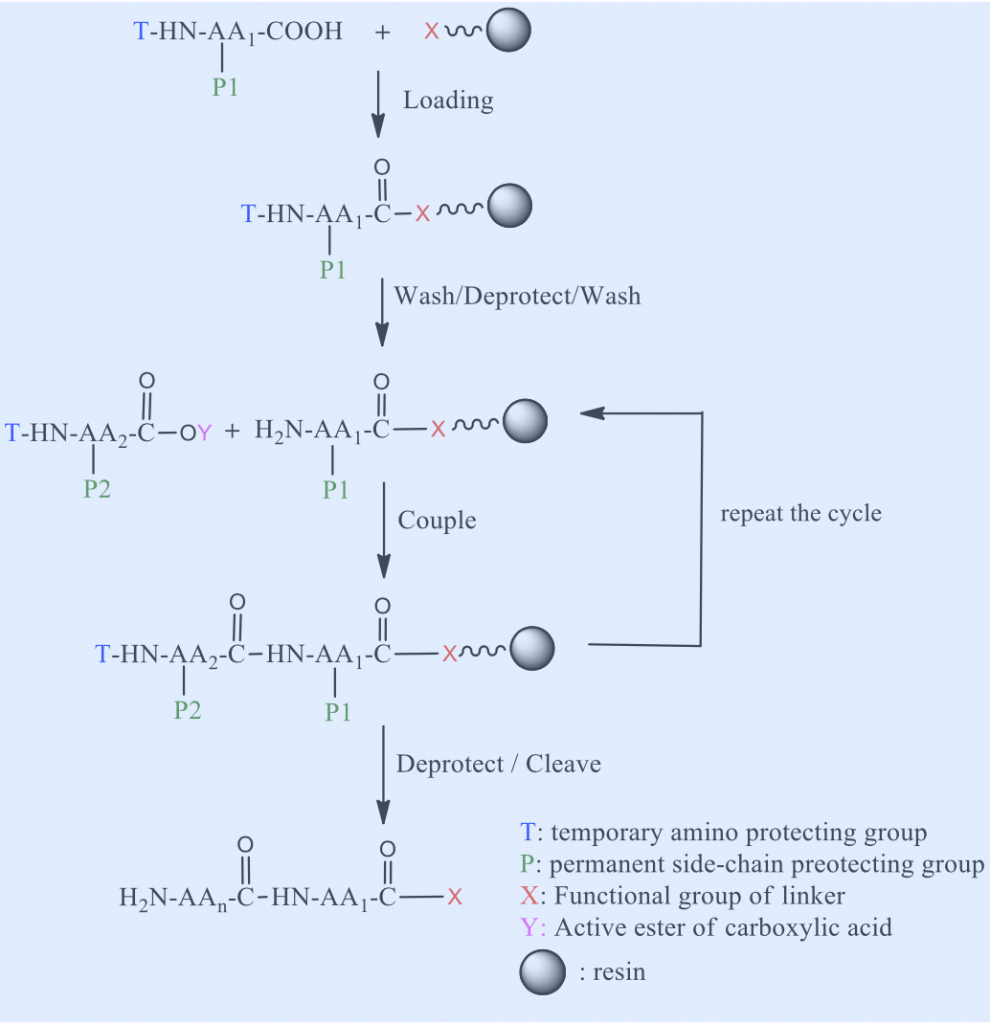 There are two categories of SPPS known as Boc/Benzyl and Fmoc/t-Bu SPPS, where the names refer to temporary N-terminal protecting group of the amino acid/permanent side chain protecting groups.

Initially, Boc-SPPS, which is also called Merrifield SPPS, was the main form of SPPS. The tert-butoxycarbonyl (Boc) group is used for temporary protection of α-amino group and removal of this group is effected with neat trifluoroacetic acid (TFA) or TFA in dichloromethane (DCM). The resulting trifluroacetate is neutralized before the coupling with diisopropylethylamine (DIPEA) or neutralized in situ during the coupling reaction. Couplings were originally carried out by activation of subsequent amino acid with dicyclohexylcarbodiimide (DCC) in DCM, but today the use of various type of potent coupling reagents in N,N-dimethylformamide (DMF) or N-methylpyrrolidone (NMP) are preferred for efficient synthesis. Permanent side-chain protecting groups (a range of benzyl based protecting groups) and peptide-resin bonds are cleaved at the end of the synthesis by usually treating the resin anhydrous hydrofluoric acid (HF). Even if this method is extremely powerful tool for efficient synthesis of large peptides and small proteins, the need to use highly toxic HF and special teflon-lined apparatus seriously hinder the usability of this approach. In addition to this, the harsh acidic conditions can cause detrimental and irreversible changes in the structure of peptides with sensitive sequences. Although Boc-SPPS is still used today, these reasons cause dwindling of Boc-SPPS method.

9-fluorenylmethoxycarbonyl (Fmoc) group was introduced in 1970 by Carpino and Han. In the late 1970s, the Fmoc group was adopted for solid-phase applications. Fmoc based SPPS strategy employs the base-labile Fmoc group for protection of the α-amino functional group, acid-labile side-chain protecting groups and acid-labile peptide-resin linkers. The temporary Fmoc protecting group is removed with 20-50% v/v piperidine in DMF as depicted in Scheme 2. Couplings are typically carried out in DMF or NMP with pre-formed active esters or using activation reagents that generate in situ benzotriazolyl esters. Cleavage of the peptide from resin and the overall side-chain deprotection is achieved with maximum 95% TFA. One of the potential advantage of this strategy is that temporary and permanent orthogonal protecting groups are eliminated by completely different mechanisms, thus facilitating the use of milder acidic conditions for final deprotection and release of peptide from the resin. Moreover, elimination of repetitive acidolysis steps enables the synthesis of peptides that are susceptible to acid-catalyzed side reactions. All in all, these are the most obvious reasons for the popularity of Fmoc-SPPS approach that is actively utilized in laboratories worldwide.